Oh the things I can say

It has been a while since my last post so I thought I'd share some of the things that Saylor is doing now.

Four days ago Saylor signed "dad" for the first time then two days later he signed "mom" so I decided to show him the sign for "please" and he started to use that right away as well! In total he knows the signs for:

hot
milk
mom
dad
more
finished
please
book
I think I will have to start showing him some more signs as he is catching on faster :)

Saylor can also say:
mom
dad
ball
nite nite
on
up
hat
burp...so funny!
that or "dat" this may have been his very first word

I am sure there are a few other things he says. When he gets frustrated he makes a certain sound that could almost be called a growl.We certainly know he is frustrated by the sound he makes at the same time its almost funny. 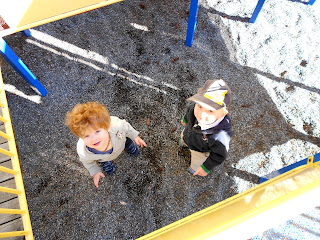 at the park with a new friend by the name of Koan
Posted by Vanessa at 5:43 PM